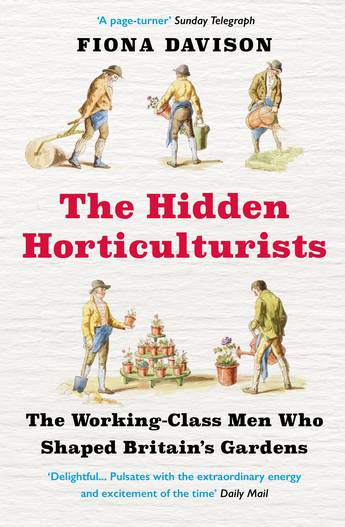 The untold story of the remarkable young men who played a central role in the history of British horticulture and helped to shape the way we garden today.

The untold story of the remarkable young men who played a central role in the history of British horticulture and helped to shape the way we garden today.

In 2012, whilst working at the Royal Horticultural Society's library, Fiona Davison unearthed a book of handwritten notes that dated back to 1822. The notes, each carefully set out in neat copperplate writing, had been written by young gardeners in support of their application to be received into the Society's Garden.

Amongst them was an entry from the young Joseph Paxton, who would go on to become one of Britain's best-known gardeners and architects. But he was far from alone in shaping the way we garden today and now, for the first time, the stories of the young, working-class men who also played a central role in the history of British horticulture can be told.

Using their notes, Fiona Davison traces the stories of a selection of these forgotten gardeners whose lives would take divergent paths to create a unique history of gardening. The trail took her from Chiswick to Bolivia and uncovered tales of fraud, scandal and madness - and, of course, a large number of fabulous plants and gardens. This is a celebration of the unsung heroes of horticulture whose achievements reflect a golden moment in British gardening, and continue to influence how we garden today.
More books by this author

Fiona Davison studied history at the University of Oxford and joined the RHS in 2012 as its Head of Libraries and Exhibitions. She appears frequently on television and radio to talk about garden history and has written numerous articles and features on the subject. This is her first book.