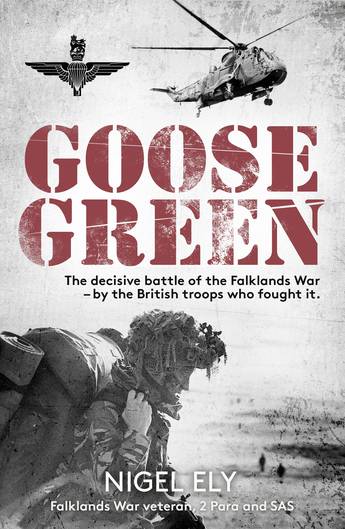 Published to mark the fortieth anniversary of the Falklands War, April-June 1982

On 28 May 1982, 450 men of the 2nd Battalion, the Parachute Regiment, stood poised to retake the settlement of Goose Green on East Falkand, where 1,500 Argentine soldiers had captured, and were holding in squalid conditions, 119 Falkand Islanders - men, women, children and one baby. 2 Para's mission: to capture the settlements of Darwin and Goose Green and save the lives of the hostages.

This is a true story of a great victory against all the odds. Forty years on, Goose Green is still the biggest, bloodiest battle the British Army has fought in modern times.

In chronological order and in their own voices, the author has compiled a living narrative of the battle by the men who fought it; the men of 2 Para, the SAS, the Royal Navy and Merchant Navy, and others, in more than a hundred exclusive and untold personal accounts. Some are side-splittingly hilarious, some sad, and some so heart-breaking they may well bring readers to tears. All the interviews were recorded face to face and then transcribed; many have been left in the speakers' own words, adding a gritty authenticity to each particular account.

The result is a book that goes beyond the official histories or the memoirs of senior commanders, to bring to life the first and, as it turned out, the decisive battle of this country's extraordinary and brilliant campaign to retake the Falkland Islands from a foreign invader.
More books by this author

Nigel 'Spud' Ely served in 2 Para as a private soldier and was later one of the youngest to pass Selection into 22 SAS. During the Falklands War he was on the first landing craft to hit the beach at San Carlos and was point man for the battle for Goose Green. He went on to fight in 2 Para's second major engagement, the battle for Wireless Ridge (2 Para was the only unit to fight two battles in the Falklands campaign) and as the firing died down, he and his comrades found themselves rapidly advancing into Port Stanley. So 2 Para became the first unit of the Task Force into the islands' capital, where they took the unofficial Argentine surrender. After leaving the British Army he worked as a military adviser for the British Government, a war photojournalist and became a bestselling author.

Betsy and the Emperor Anne Whitehead