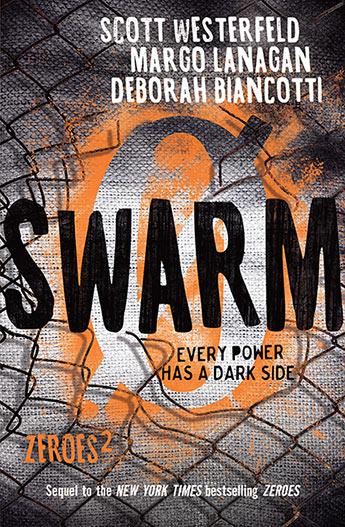 EVERY POWER HAS A DARK SIDE. Keep the secret. Use your power for good. Keep out of trouble. Stick together. Or things will fall apart.

It's the holiday season, but the celebration at the Zeroes' underground nightclub is blown apart when two strangers with new powers take to the dance floor. The Zeroes pursue them, only to discover that they're fleeing an even more sinister power-wielder, Swarm. The Zeroes must learn all they can about this dangerous new player if they are to stay safe.

Meanwhile each of the Zeroes also has their own issues to deal with. Bellwether's confidence is challenged, and Mob questions the nature of her power. Crash's conscience gets a workout, and Anon and Scam face harsh truths about belonging. And it's up to Flicker to pick up the reins and lead the Zeroes into a terrifying showdown.

A terrific sequel with a cracking pace that raises the stakes in this brilliant and unique superheroes series.
More books by this author More books in this series

Scott Westerfeld is the #1 New York Times bestselling author of the Uglies and Leviathan trilogies. His novel So Yesterday won the Victorian Premier's Literary Award. His latest solo novel is Afterworlds. Margo Lanagan has won four World Fantasy Awards for her short stories and for her novels Tender Morsels and Sea Hearts. Her work has also been shortlisted in the Hugo and Nebula awards and longlisted in the International IMPAC Dublin Literary Award and for the Carnegie Medal. Deborah Biancotti has published two short story collections. Her Aurealis-shortlisted Bad Power explored ordinary people discovering their superpowers. All three authors live in Sydney, where they are part of the overlapping communities of writers of genre and young adult fiction. They meet at a pub to keep the Zeroes series on track and squabble about characters' motivations.