Kaitlin M. Roig-DeBellis attended The University of Connecticut, where she completed her Masters of Education with honours from the Neag School of Education in 2006. In 2007 she began teaching first grade at Sandy Hook Elementary School.

In 2013, while on temporary leave from teaching, she founded Classes 4 Classes, Inc. Kaitlin has been honoured as a Glamour Magazine Woman of the Year. She was also chosen as one of 'L'Oreal Paris Women of Worth' of which she was among '10 Inspiring Women Making Beautiful Differences in their Communities' for her work with Classes 4 Classes. In 2013, she attended the State of the Union address as a guest of First Lady Michelle Obama. That same year she received the Dedicated Teacher Award from The Chicago International Conference on Education.

She contributes to a bi-weekly educational blog for the Huffington Post and contributed to the book, Teaching From the Heart, Volume 2. She has been featured in People, Marie Claire, Glamour, Cosmopolitan, and All You, and appeared on The Nightly News with Diane Sawyer, Anderson Cooper 360 and The Katie Couric Show. Kaitlin currently speaks to School Boards, Administrators, Teachers and High School and College students across the United States and Canada as a keynote and commencement speaker. In 2014, she ran the New York City Marathon in honor of the lives lost at Sandy Hook. 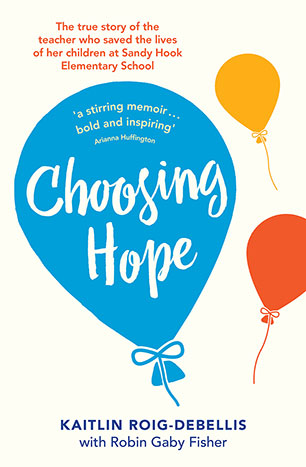 Both a chilling and moving account of the Sandy Hook massacre told by the teacher who saved 15 of her students by hiding in a bathroom and a book about recovery from trauma with an inspirational and life-affirming message.